A version of this story appeared on OpenSFHistory.org for Green Apple Books’ 50th anniversary in 2017.

I’ve been a customer of beloved Green Apple Books for most of my life. I find it one of life’s greatest pleasures to browse the stacks of the original store at 506 Clement Street, the floorboards creaking under my feet as I wander the funky labyrinth of shelves and staircases.

Different kinds of customers trod those same floorboards before Richard Savoy opened his Richmond District bookstore in 1967. In the late 1940s, the building’s storefront was shared by Ed’s Togs, a dealer in men’s clothing, and Vincent Belmonte’s Coliseum Furs.

That the building is old should not be surprising to anyone who has climbed the wood staircases inside Green Apple Books, but what shocked me was how different 506 Clement originally appeared.

Just before the turn of the twentieth century, the Green Apple Books building was addressed 504 Clement Street and the home of Hippolyte Cuneo's family. Cuneo was a foreman at the Joshua Hendy Machine Works in North Beach. He had moved with his wife Julia and their six children to Clement Street about 1895, and it’s possible the house was built about 1897.

One of Hippolyte’s granddaughters, Jean Portello, returned to 506 Clement Street in 2017 with her granddaughter for a visit. Jean was able to find the bedroom she slept in during the 1930s (upstairs in what I believe is now the Philosophy section). I was lucky enough to be making my weekly trip to the store and met them. Jean’s granddaughter later sent me an image (above) of the Cuneo home in the late 1890s. I believe Jean’s mother is one of the girls on the steps.

How does the peaked-roof Victorian match up with the familiar stucco-clad facade we all know so well today? Modern aerial views of the building show a flat roof from sidewalk to the rear of the lot. The look of the second story has been the same since Ed's Togs dealt seersucker suits during World War II, although a circa 1916 postcard view shows there once had been two bay windows before a 1930s Art Deco remodel. Even so, no Victorian home is visible. It must have been torn down, right?

Ah, but you’ll note that in the 1890s photograph Hippolyte Cuneo’s house was set back from the sidewalk with a cute little front yard. That space would be filled with a storefront addition, perhaps less than ten years after the home’s construction.

The Richmond District’s population boomed just after the 1906 earthquake and fire. Tens of thousands of people from the burned-out neighborhoods on the east side sought relief and permanent new homes in the mostly undamaged west. With the refugee relief headquarters and local post office nearby, the intersection of 6th Avenue and Clement Street became the neighborhood's unofficial town square. It was also a transfer point for streetcar lines.

The Cuneo front garden and entry stairs quickly became valuable real estate. The addition of a candy store/soda shop with apartments above made for instant income with the original house still in place behind. If we go back as far as 1909, we can see the peak of the old house is poking up above the Quality Inn candy store run by Miss L. B. O’Neil at 504 Clement Street:

At some point, likely during the Art Deco remodel, the building lost its attic and the gabled roof and the connection between addition and house was more formalized.

I love that neighborhood institutions I know intimately, like Green Apple Books, can still hide historical secrets, although I suppose I shouldn't be surprised. As the old saying goes, you can’t judge a book by its cover.

Great thanks to Jean Portello and Jean Minton for being kind to a strange historian accosting them on the sidewalk.

San Francisco's Pacific Heights has a 7-foot remnant from a moved house that escaped the 1906 earthquake and fire. 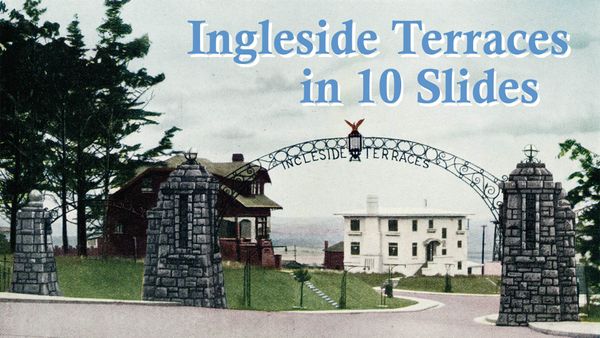 The horse-racing track turned into residence park (with one big sundial).

Paid-members only
Long before Nazis there were swastikas—around the world and in San Francisco. Plus, what happened to Engine Company 12?